Many young aspiring footballers in West Africa see participation in professional football, which has over the years become a global multibillion industry, as a pathway out of poverty and marginalization. Aspiring footballers join football academies that have recently mushroomed all over West Africa, hoping to follow in the footsteps of the likes of Didier Drogba and Samuel Eto’o. The image of an accomplished high-profile West African football star who embodies the masculine ideal of an independent and responsible adult man, capable of financially supporting his relatives and entire communities, further underpins the shared sentiment. Yet these widely circulating images obscure the harsh reality – that out of thousands of young football hopefuls, only a tiny fraction will get a chance to migrate abroad to play football professionally. In that fortunate group, only a few make it to clubs in the top football leagues of Western Europe, while the majority land on the margin of European football, in obscure settings like Polish lower-division clubs, the majority of which are located in the countryside.

Having overcome marginality in one setting, these footballers find themselves yet again in a marginal position. They expected that reaching Europe would be the end of their struggles, but they have to face instead low wages, solitude, lack of exposure and meagre prospects of athletic progress. At the beginning, young West African footballers stay positive and think that these hardships are only temporary, in the hope that Poland will be a stepping stone to a more lucrative career elsewhere. In reality, such career trajectories hardly ever materialize for those who end up in Poland. In more than a decade, only two West African footballers in Polish lower divisions have managed to get a contract in a better league.

Over time, West African football players grow increasingly frustrated with their predicament and begin to realize the impossibility of escaping marginality in Polish football. They then look for alternatives, often moving to a place where there is some kind of West African diasporic community. Warsaw, the capital and the most culturally diverse city in the country, is the most popular choice.

The West African community in Warsaw is small and dispersed, but one spot in the capital plays an important role for West African football migrants. It is a public artificial football pitch in one of the city parks, where they have formed an informal community club called PolBlack. PolBlack is very well organized – it has an elected president, a set of rules and regulations that members have to abide by, as well as fines and suspensions for failure to do so. West African migrant footballers and non-footballers meet regularly for trainings, informal games, and some slightly more organized football events, such as games between Anglophones and Francophones, or between current professional footballers and former players. Apart from the obviously sport-oriented character of those get-togethers, the park also serves as a spot where West Africans of all trades gather to socialize, celebrate important occasions, and carry out businesses, but also seek help of fellow West African migrants in club or job hunting, or in dealings with Polish bureaucracy.

The photographs presented here are the result of my 18-month long fieldwork that has allowed me to witness the less glamourous side of the global football industry – football academies of Lagos, training pitches and stadiums of lower division clubs in Poland, and the park, which brings together West African football migrants who have given up the hope of making it in professional football as well as those who still hope they can achieve athletic success. 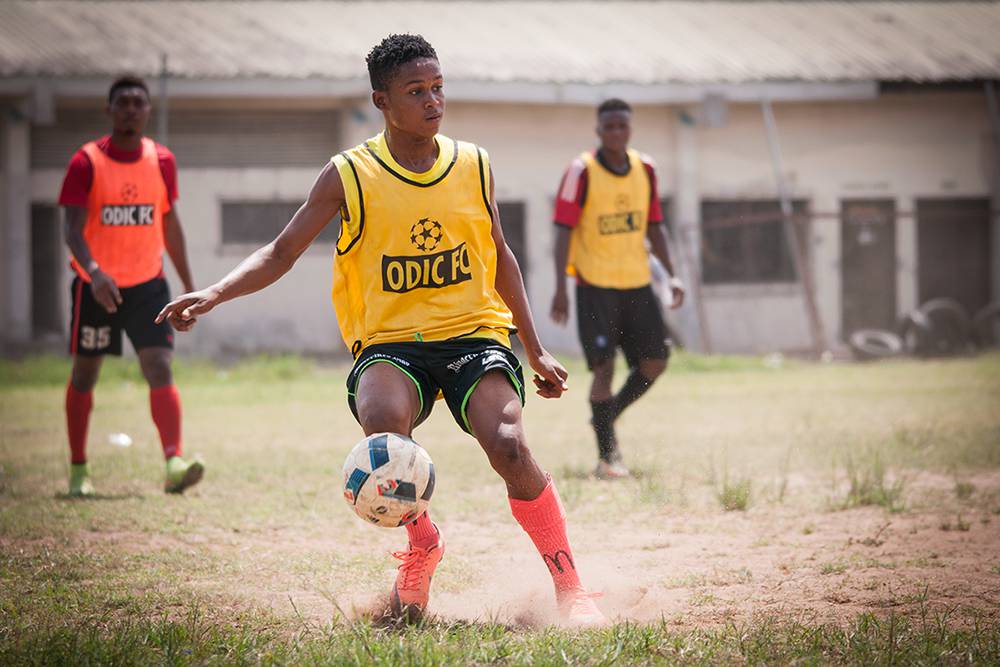 A young boy participates in a game during a tournament organized by two football academies based in Satellite Town, Lagos. During such tournaments, young football hopefuls have a chance to showcase their talents to scouts from Europe hoping to earn a move to a European club. Lagos, Spring 2016. (Photo Paweł Banaś)

Two Cameroonian football players – Austin and Nelson – stand in front of their “home” in a village in the south of Poland, which they shared with fellow footballers – two Cameroonians and three Brazilians - throughout the 2014/2015 season. The building, located at the roadside, is a tavern that went bankrupt and was turned into a dwelling. Southern Poland, Winter 2015. (Photo Paweł Banaś) 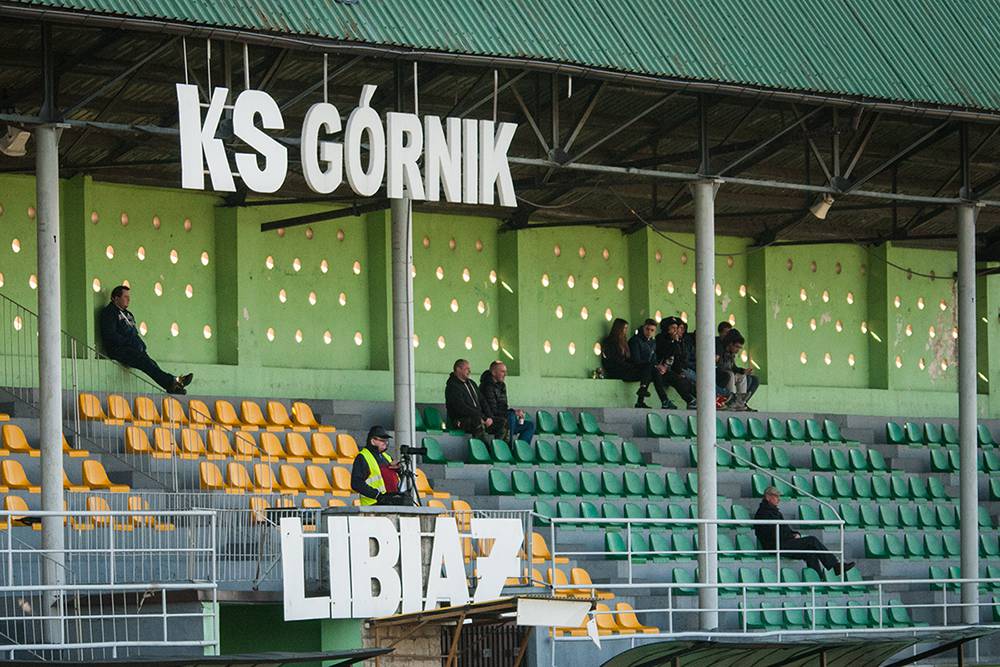 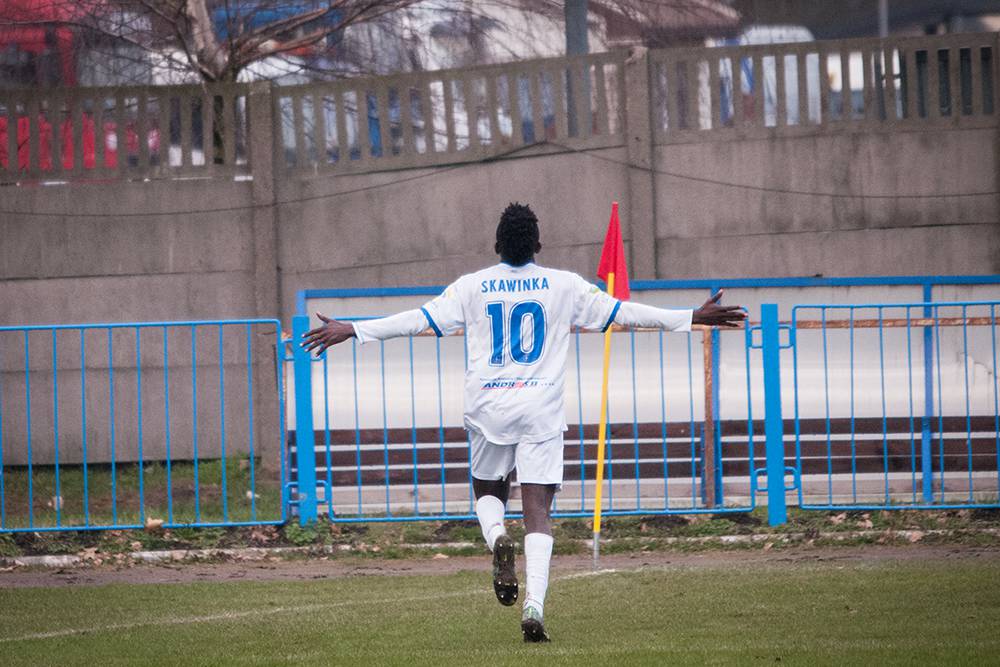 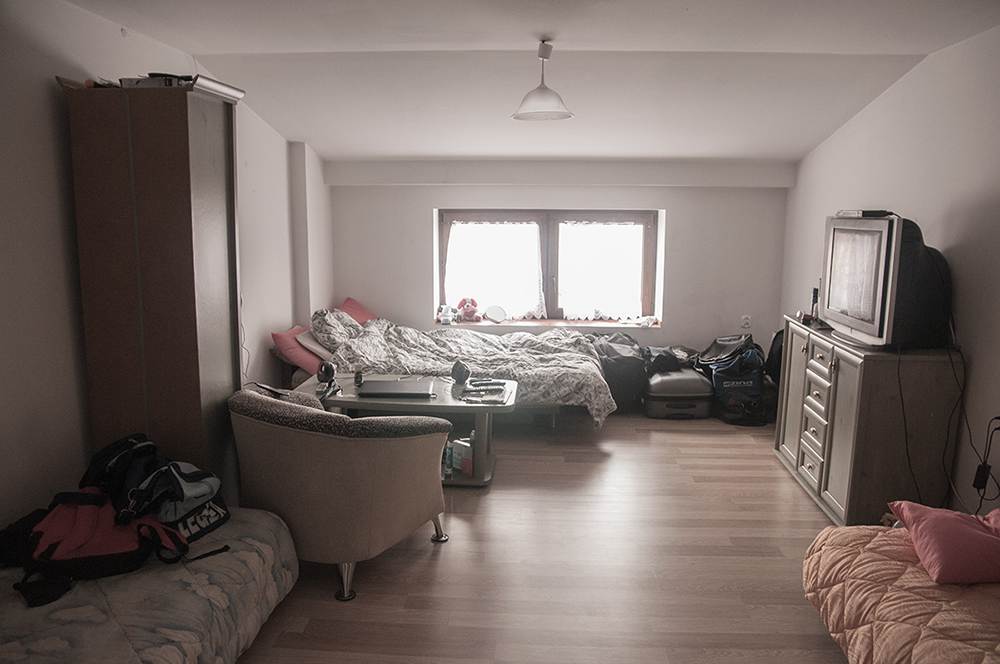 A flat in the attic in which one of the West African footballers resides. His fifth division club pays the rent. It is a common practice in lower divisions for clubs to pay only meagre salaries, but to offer basic accommodation to their West African players. Central Poland, Spring 2016. (Photo Paweł Banaś) 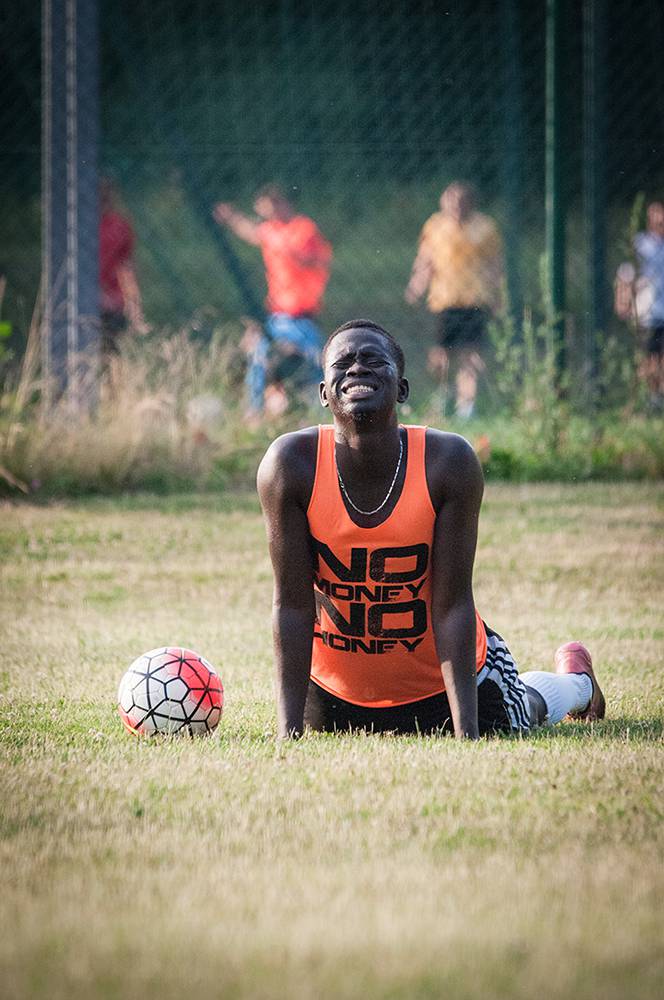 Idrissa, a young Senegalese footballer who plays for an amateur fifth division side near Kraków, in the south part of the country is stretching after an extra training session. He and a few other West African players who live in and around Kraków meet every morning for “private” two-hour long trainings with their Nigerian manager, and former football player Sunday Ibrahim. Kraków area, Summer 2016. (Photo Paweł Banaś) 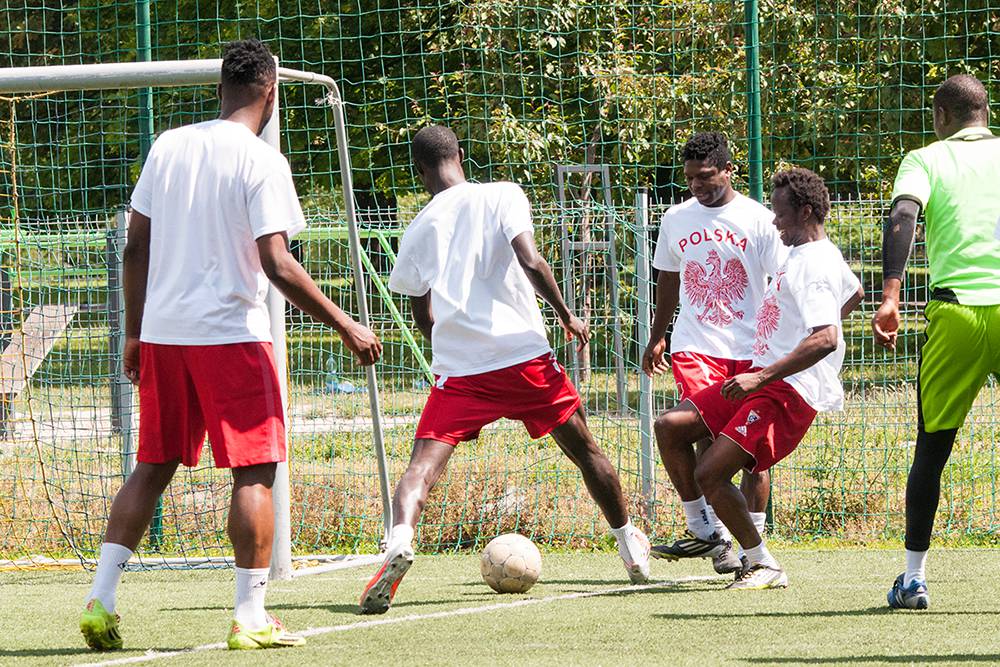 West African football players who currently play in Poland warm up before a friendly game with former players doing rondo, a popular practice in which a group of players standing in a circle pass the ball to one another while two footballers in the middle of the circle try to intercept the ball. Warsaw, Summer 2016. (Photo Paweł Banaś) 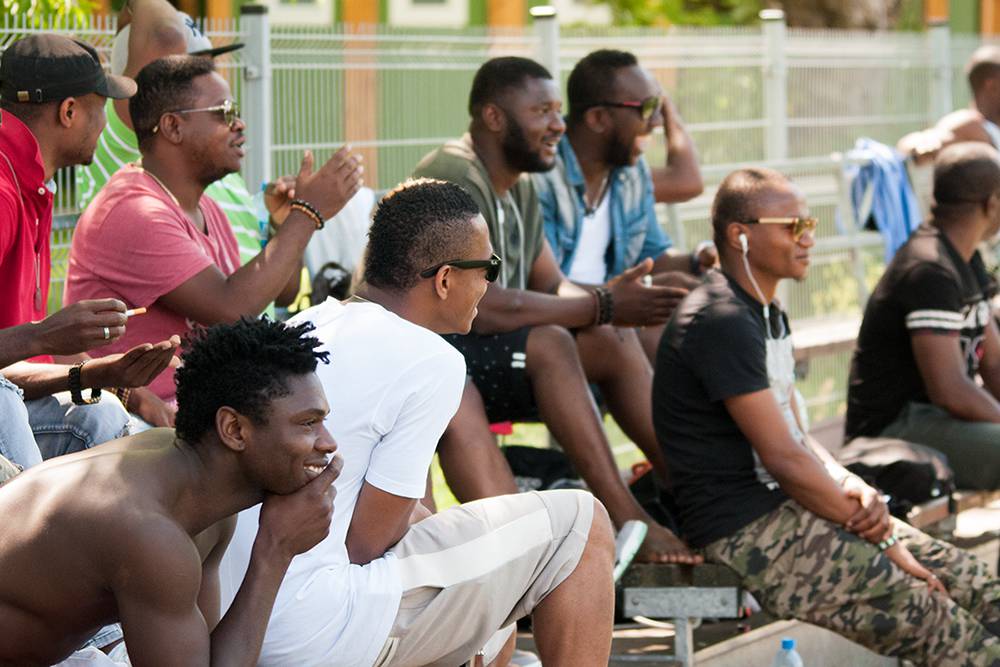 The crowd gathered during a football game in the park. West African migrants often come to watch games and trainings, but also to socialize and carry out business activities. Many sitting in the bleachers are former football players who still reside in Poland. Warsaw, Summer 2016. (Photo Paweł Banaś) 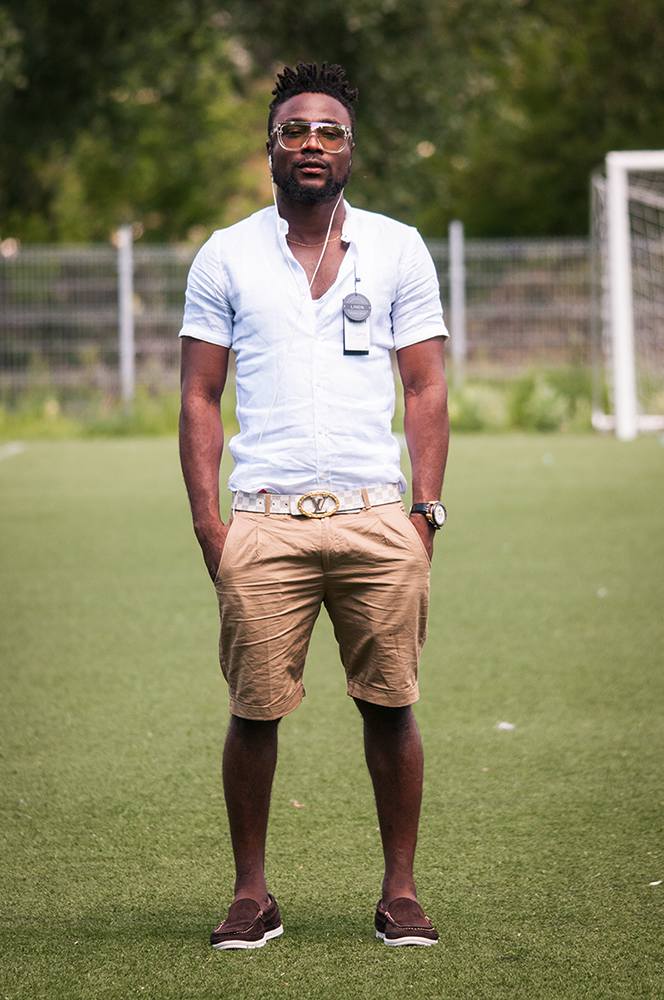 Emeka, a 26-year old Nigerian striker. Released by his former club because of a nagging knee injury that limited him to six games last season, he moved to Warsaw to continue his rehabilitation at his own expense with hopes of reviving his career. Warsaw, Summer 2016. (Photo Paweł Banaś) 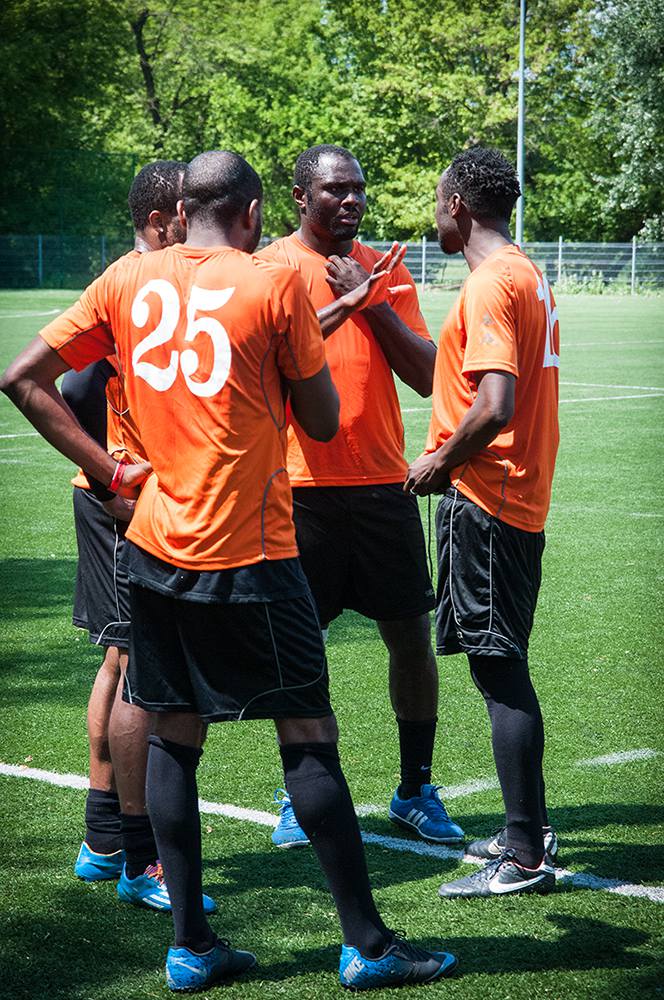 Ifechi and Ifeanyi (both on the right) discuss a plan for the second half of the game (their side trailed 0-3 with the team composed of active players), while two of their teammates stand close and listen. Ifechi and Ifeanyi, who have been in Poland for almost a decade, are prominent figures in the park community, and both served in the past as presidents of PolBlack. Warsaw, Summer 2016. (Photo Paweł Banaś) 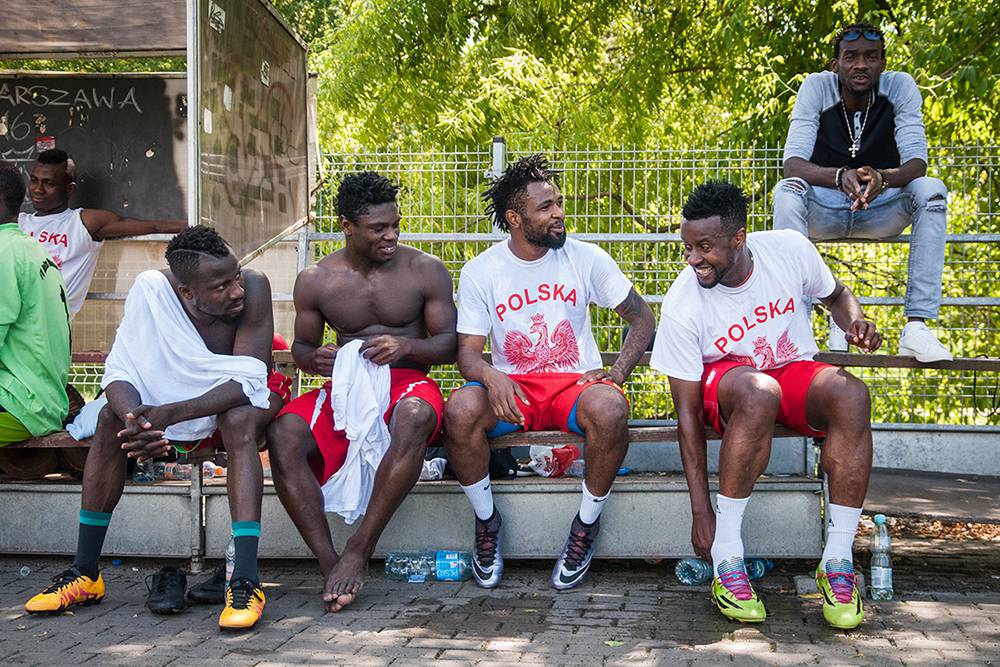 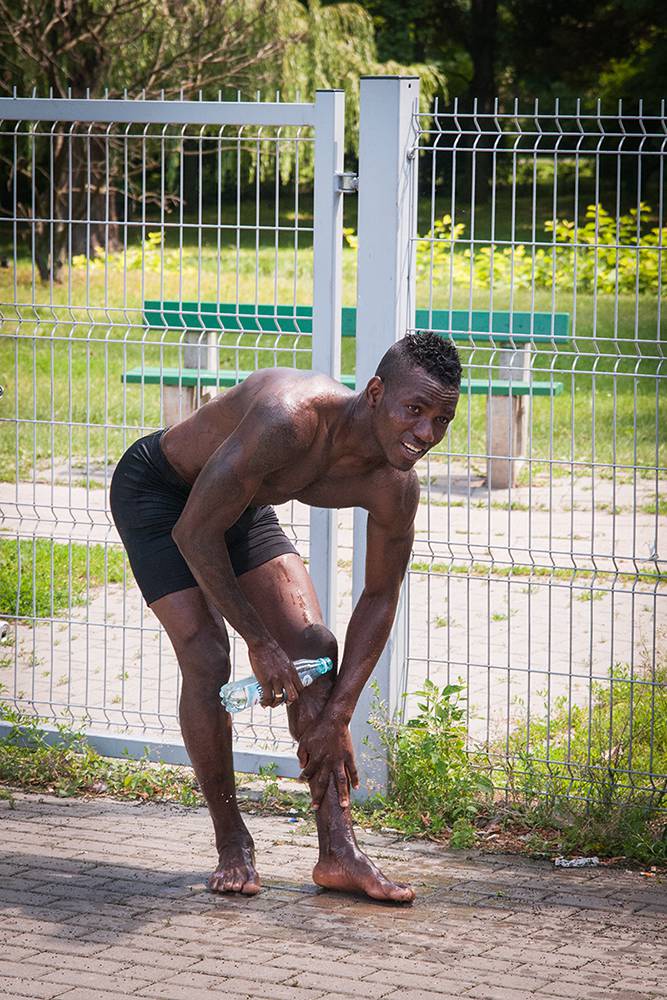 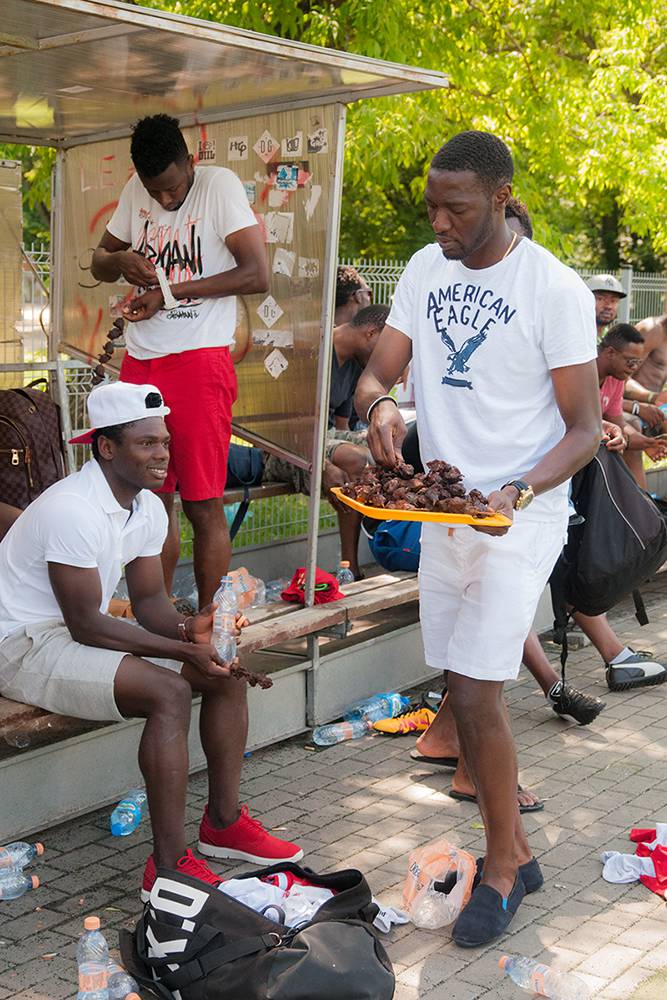 Olabode, who recently got married, hands out barbecued chicken to his friends in the park. West African football migrants often hold informal parties in the park. Weddings, the birth of children, and other important occasions are celebrated with food, drinks, music and dances. Warsaw, Summer 2016. (Photo Paweł Banaś) 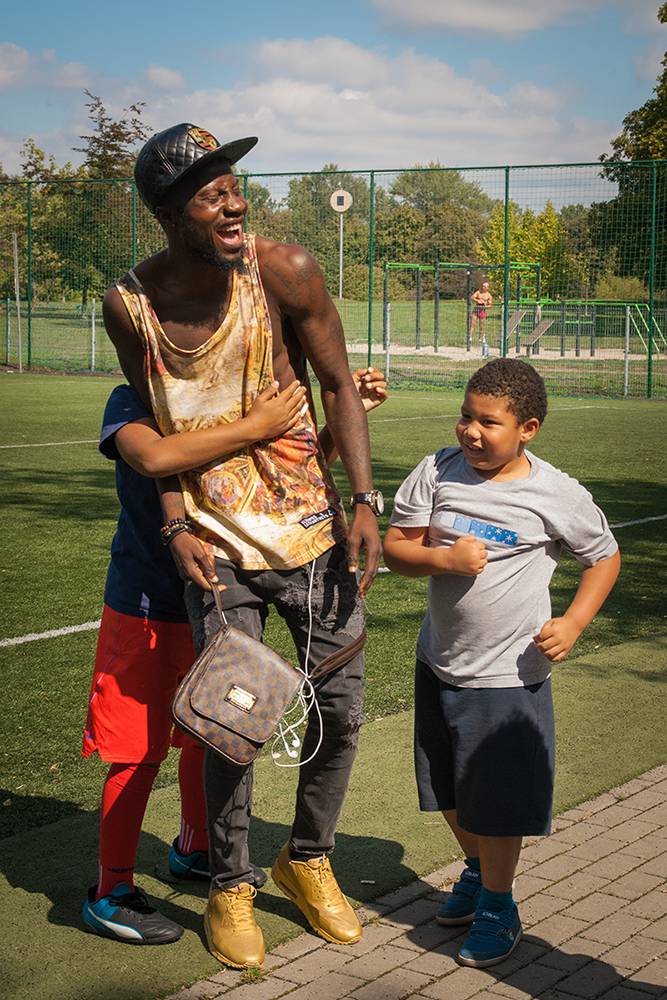 Children of park regulars swarm Olabanji to take the ball away from him during a game in the park. Most of the kids are enrolled in local youth academies and, like their fathers, dream of becoming professional footballers. Warsaw, Summer 2016. (Photo Paweł Banaś)