Xam Sa Cossan, 'Know your Heritage': Senegalese Wrestling and the 'Rediscovery' of Ethnicity'

"On my mother's side I'm Diola. That's why I'm a good wrestler. Well, actually my family is Socé from Sédhiou, in Casamance. Before my next fight, I want to go to Casamance to solicit prayers from the marabouts there." – Omar, wrestler, Pikine, Dakar

Ethnicity in the City

It came as something of a surprise to me when Omar, an aspiring wrestler whom I had come to know during my fieldwork, revealed to me his Casamançais ancestry. Of course, there was nothing really surprising about the fact itself – Dakar's ever-expanding suburban areas are populated by people who have moved to the capital from all over Senegal as part of an ongoing rural exodus since the mid-20th century: Diola and Mandinka from Casamance, Peulh from the Senegal river valley, Sereer from the Saloum delta, and Wolof from the country's interior, to name just some of the groups that make up Dakar's complex ethnic landscape. What was surprising to me was that Omar himself brought up the topic. Among young Dakarois, ethnicity often appears to be a somewhat vague category that they rarely mention; one which is less central to urban identity than, say, religious affiliation or place of residence. In other words, the district in which one lives today is more significant than the village where one's parents or grandparents were born. Observers have suggested that urbanization in Senegal has been accompanied by processes of de-ethnicization and Wolofization, whereby urbanites adopt "Dakar Wolof" – a French influenced Wolof dialect – as their lingua franca and develop urban ways of life that blur boundaries of ethnic differentiation.

For young men like Omar and his friends, these urban ways of life are a source of pride and a key part of their identity. Being from the "ghetto" – as they often refer to their neighbourhood on the fringes of Dakar's sprawling commuter zone – gives them a sense of toughness, urban knowledge, and a style that eludes their rural cousins. This is often expressed through the figure of the "Boy Town" that represents a savvy urban hustler, in opposition to his discursive other, "Common Town" (come in town), effectively a country bumpkin. In such representations, the city is portrayed as a site of modernity and progress, a gateway to the world – albeit one where morality is at risk. Conversely, village life is considered backward and underdeveloped, whilst simultaneously venerated as the site of "pure" language, "pure" culture – and also "pure" wrestling. 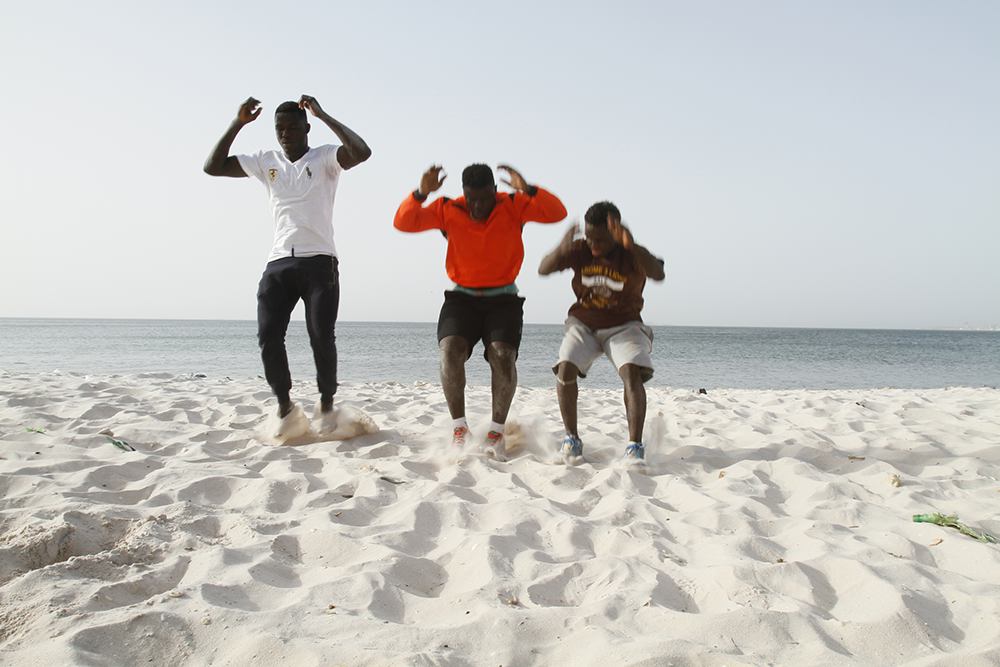 While wrestling is popularly presented as Senegal's national sport and is considered to be a shared heritage of Senegambian peoples, today it comes in a variety of forms. These include Olympic wrestling, numerous styles of "traditional" wrestling, and the commercially popular lutte avec frappe – a hybrid sport that combines elements of traditional wrestling with bareknuckle boxing. It is the latter discipline which has succeeded in capturing the attention of the Senegalese public and that provides young men like Omar and his teammates with dreams of lucrative careers. It is this dream of wealth and success that drives the wrestling boom in Dakar.

When the first wrestling associations, known as écuries, were established in Dakar, ethnicity and geographical provenance were the main organisational principle: écurie Sereer, écurie Diola, écurie Halpulaar, écurie Baol, and écurie Walo each brought together wrestlers of a specific ethnic group or historical region; only the écuries of Pikine and Fass defied this logic in grouping together athletes from a specific area of Dakar. Today, however, this latter form of organisation dominates and the associations are generally not mono-ethnic. At the same time, other ethnically specific elements of wrestling – notably the bakk or self-praise singing – have been gradually erased from the sport. Contemporary wrestling in Senegal is now a professionalized commercial sport dependent on individual stars who are widely seen as aspirational celebrities. The famous wrestler Mohammed Ndao "Tyson" did much to popularize the image of the wrestler as an entrepreneurial self-made man, fashioning his image on that of his boxing namesake, engaging heavily in marketing and commercial activities, and promoting himself as an icon of youthful rebellion. 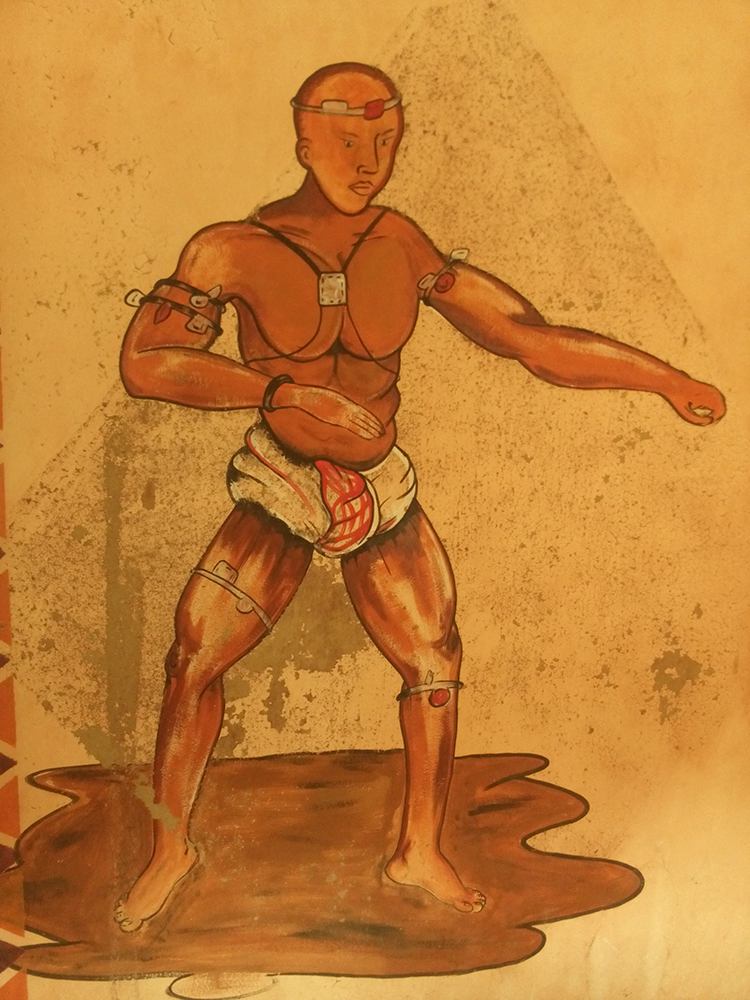 Wrestling with Ethnicity (or, the Importance of Being Diola)

Despite the commercial explosion of wrestling since the 1990s and its development from a village pastime to an urban and entrepreneurial pursuit, ethnicity has not completely disappeared. In fact, it persists in a number of particular ways: in discourses of physical qualities associated with wrestlers of specific groups; in the form of political and economic alliances forged along ethnic lines between wrestlers and their patrons; via narratives of pre-destination, in which wrestlers of specific ethnic backgrounds (especially Diola and Sereer) claim that wrestling is "in their blood"; through ethnically specific clothing, objects, or cultural performances displayed on the occasion of a fight; and in the magico-religious powers which are associated with wrestlers of certain ethnicities (again, especially Diola and Sereer).

Established star wrestlers regularly evoke their ethnic provenance in the build-up to big fights and, as in any other sport, young hopefuls are quick to copy their idols. Omar's (technically incorrect) insistence on his Diola heritage was just one of several examples I came across during my fieldwork of young wrestlers referring to ethnicity in order to strengthen their claims of athletic prowess. Another young wrestler, Modou, would regularly tell me that his Sereer heritage meant that wrestling was an ancestral calling and that he was unable to follow another path in life. Ama, an aspiring wrestler from Pikine, visited his mother's Sereer village for the first time after starting to train for a career in the arena. He told me that he has sought out the services of Sereer marabouts and diviners ever since, thus reconnecting with the belief system of his grandparents. 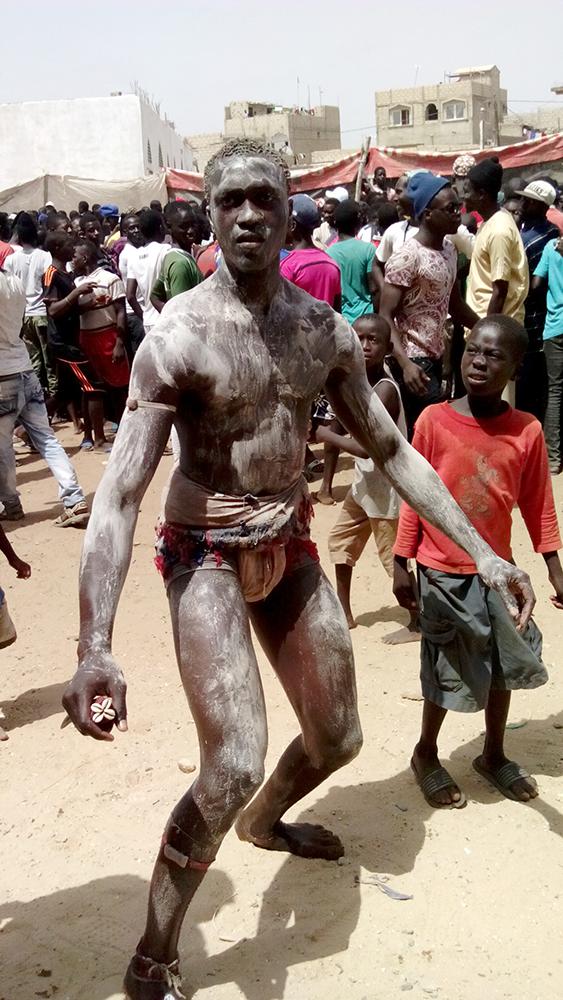 A young wrestler prepares for a combat in Dakar, wearing his nguimb or loincloth in the traditional Sereer style (Photo: Niko Besnier)

The shared motif of these stories is that of young men who do not seem to have grown up with a clearly defined ethnic identity returning to paradigms of ethnic difference in order to underline or strengthen their identities as wrestlers. In the context of urbanization and Wolofization in Dakar, this seems almost paradoxical; in the context of a professionalizing sport and an increasingly globalized society, even more so. This return to ethnicity – or re-ethnicization – not only disrupts commonly held assumptions about rural and urban relations; it also calls into question the nature of Senegal's modernities. In addition, it poses a challenge to Senegalese nationalism: does the presence of an ethnic discourse within the sporting arena threaten the notion of the multi-ethnic nation state?

It is impossible to adequately address these questions without further enquiry into the state of ethnic relations and discourses in society at large, and particularly in politics, where accusations of ethnic favouritism are never far away. At the very least, one might conclude from these observations that sport can intervene in social dynamics in surprising ways. The re-ethnicization of wrestling leads us to reconsider what we mean when we speak of a national sport and a traditional sport – and by extension, the very categories of tradition and nationhood. 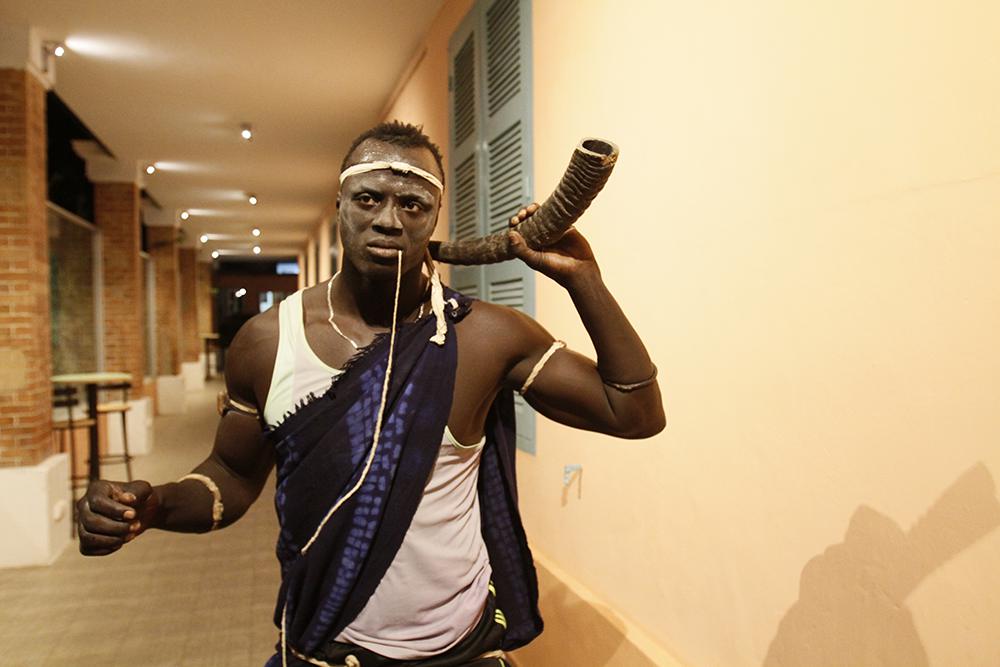